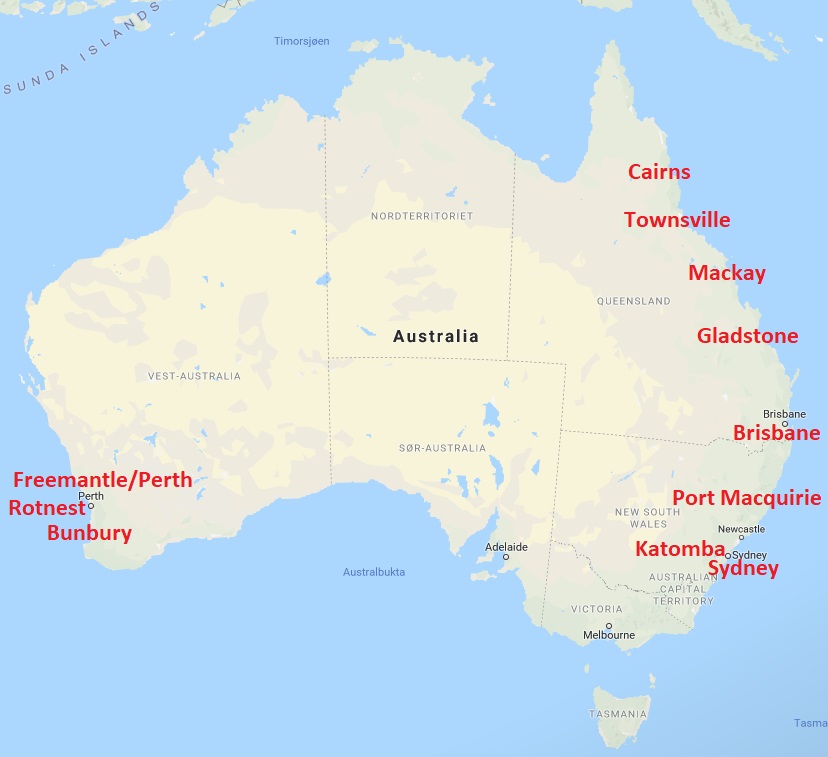 Australia , officially known as the Commonwealth of Australia, is a sovereign country comprising the mainland of the Australian continent, the island of Tasmania, and numerous smaller islands. The population of 26 million, with a density is 3.2 inhabitants per square kilometre, is highly urbanised and heavily concentrated on the eastern seaboard. Australia’s capital is Canberra, and its largest city is Sydney. The country’s other major metropolitan areas are Melbourne, Brisbane, Perth, and Adelaide.
Surrounded by the Indian and Pacific oceans, Australia is separated from Asia by the Arafura and Timor seas, with the Coral Sea lying off the Queensland coast, and the Tasman Sea lying between Australia and New Zealand. Australia’s size gives it a wide variety of landscapes, with tropical rainforests in the north-east, mountain ranges in the south-east, south-west and east, and desert in the centre. The desert or semi-arid land commonly known as the outback makes up by far the largest portion of land. Australia is the driest inhabited continent.

My visits to Australia:

1981: I first saw Australia from 30.000 feet when flying from Aucland in New Zealand to Singapore, crossing the continent from Brisbane in the East to Darwin in the North.

1989: My first visit to Australia was to visit a friend in Sydney. We drove along the East Coast all the way up to Townsville where I joined two diving trips to the Great Barrier Reef. I had bought my first video camera in Singapore on my way down – a Video 8 format camera (with low resolution and terrible colors compared to even today’s mobile phone cameras).

2007: My second visit to Australia was in connection with my work. I had to visit two ships – one in Gladstone on the East Coast, and one in Bunbury on the West Coast. While waiting for the ship to arrive in Bunbury I stayed in a hotel in Fremantle. From there I visited Perth and had a nice day at the Rotnest Island.

Perth is the largest city in Western Australia, and Fremantle is a port town located at the estuary of the Swan River. I stayed in the Esplanade Hotel.

Fremantle is a relatively lazy town, or at least that is what it seemed to me.

This small video is an extract of Fremantle video/photo clips from my full movie.

January 2007: By boat from Fremantle to Perth

While waiting for our ship to arrive in Bunbury I had time for sightseeing.

Rottnest Island is an island 18 kilometres west of Fremantle. It was separated from the mainland around 7000 years ago when sea levels rose. Human artefacts have been found on the island dating back at least 30000 years. The island covers 19 square kilometres, and has a permanent population of around 300 people, with around 500000 annual.

Rottnest is well known for its population of quokkas, a small native marsupial found in very few other locations. The island is also home to colonies of Australian sea lions and southern fur seals.

Perth Zoo is a 41-acre zoological park in South Perth. The zoo first opened in 1898 and by 2011 housed 1258 animals of 164 species, and an extensive botanical collection.

The first exhibits built included two bear caves, a monkey house, a mammal house and a model castle for guinea pigs. The first animals on display included an orangutan, two monkeys, four ostriches, a pair of lions, and a tiger. At first there were only six staff members. The zoo had 53,000 visitors in its first nine months, and had not been closed for a single day since it was opened, until it was temporarily closed from 24 March 2020 during the coronavirus outbreak.

I met my friend in Sydney, and after some sightseeing in the city we drove north to Townsville. Another friend joined us for the tour north on her way to other destinations. We stayed overnight in several places. In Townsville I wanted to dive on the Great Barrier Reef, but my friends did not have diving licences. First I had a weekend tour to the reef, and after a day in Townsville back I joined a 4-days tour to the reef.
On our way back to Sidney we drove inland from Rockhampton and followed another road as far south as Port Macquarie. My last days in Australia we visited the Blue Mountains west of Sidney.

This first video camera recorded on Video 8 cassettes, and were not very good quality. I was disappointed when I viewed the films at home, and sold the camera not long after. I bought a better video camera two years later.

February 1989: Weekend tour to the Great Barrier Reef from Townsville

This video is from a weekend tour to Wheeler Reef. There were also new beginners onboard having just finished their basic diving course.

The Great Barrier Reef is most likely the top diving area in the World. It is one of the richest and most complex and diverse ecosystems in the world.

February 1989: 4-days tour to the Great Barrier Reef from Townsville

This video is from a 4-days tour where we dived at the famous Yongala wreck, Chicken Reef and Wheeler Reef. The highligt of the tour was the shark feeding.

After having a wonderful weekend tour to the reef, I just had to have another tour and booked a tour with only experienced divers. I had a Padi Rescue Diver licence.

The Great Barrier Reef is most likely the top diving area in the World. It is one of the richest and most complex and diverse ecosystems in the world.

Castle Hill at the centre of the city has amazing views both east to Magnetic Island and west to the suburbs and hills. There is a road to the top, but the steep uphill walk is also popular, particularly in the evening when it is cooler.

When driving southwards through the Sommerset area we saw a “Gold Prospecting” sign, and I just had to try! We borrowed a pan and were shown a gully where they had found gold (- at least that is what they said). I digged out some dirt and sand and tried to wash it in a nearby creek. Of course we did not find any gold, but it was fun to have tried. I suppose we were not patient enough, and we did not have much time. They said that there were Platypus (animals) in the creek, but we did not see any.

The Apsley Falls are two waterfalls on the Apsley River in the Northern Tablelands region of New South Wales. The falls are located about 20 kilometres east of Walcha in a deep gorge that is part of the Oxley Wild Rivers National Park. They are the first falls in a succession of dramatic drops in an area that has some of the most remarkable scenery in Eastern Australia. The first drop of the falls is about 65 metres in depth, and the second, which is about 800 metres further on, plummets 58 metres to the bottom of the gorge.

Timbertown is a popular attraction, depicting the colonial era of a sawmiller’s village in northern New South Wales. It is located in 39 hectares of coastal blackbutt (Eucalyptus) forest on the Oxley Highway at Wauchope near Port Macqarie. Timbertown is an interactive museum which has enjoyed periodic success as a family-friendly tourist attraction. The key attractions are the narrow gauge railway, with a steam train and a short circuit track within and around the village, and the Bullock team demonstrations. There are several businesses operating including a blacksmith, timber furniture, winery, and Wallaces Store with souvenirs and confectionery. The Maul and Wedge serves meals in school holidays & public holidays and is available for hire for private functions. Local artisans offer both local woodwork, artwork and craft items.

The Jenolan Caves are limestone caves located west of the Blue Mountains. The caves and 3,083-hectare reserve are situated approximately 175 kilometres west of Sydney, 74 kilometres by road west of Katoomba. The caves are the most visited of several similar groups in the limestone caves of the country, and the most ancient discovered open caves in the world. They include numerous Silurian marine fossils and the calcite formations, sometimes pure white, are noted for their beauty. The cave network follows the course of a subterranean section of the Jenolan River. It has more than 40 kilometres of multi-level passages and over 300 entrances. The complex is still being explored.

After our tour from Sydney to Townsville and back, we drove up to Katoomba in the Blue Mountains – a mountain range about 50 kilometres west of Sydney.

This is just a short video from our arrival in Katoomba, driving through the streets to our hotel near the Echo Point and the famous Three Sisters rock formation.

The Blue Mountains are a mountainous region and a mountain range, its foothills starting about 50 kilometres west of Sydney. The name Blue Mountains is derived from the blue tinge the range takes on when viewed from a distance.

From the Echo Point near Katoomba, a bushwalking trail leads to the famous Three Sisters – an unusual rock formation on the north escarpment of the Jamison Valley.  Their names are Meehni (922 m), Wimlah (918 m), and Gunnedoo (906 m) – formed by land erosion around 200 million years ago during the Triassic period when the sandstone of the Blue Mountains was eroded over time by wind, rain and rivers, causing the cliffs surrounding the Jamison Valley to be slowly broken up.