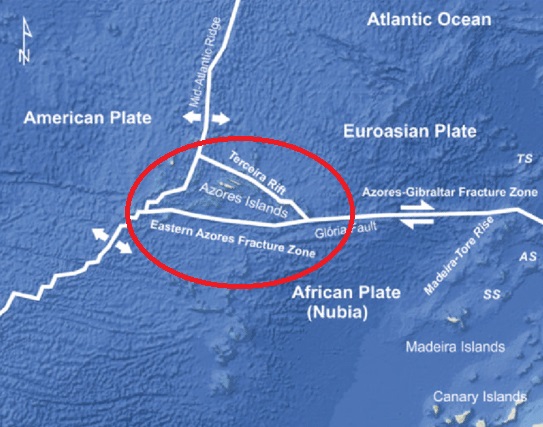 The Azores  is one of the two autonomous regions of Portugal (along with Madeira). It is an archipelago composed of nine volcanic islands in the Macaronesia region of the North Atlantic Ocean, about 1,400 km west of Lisbon. These are Flores and Corvo, to the west; Graciosa, Terceira, São Jorge, Pico, and Faial in the centre; and São Miguel, Santa Maria, and the Formigas islet to the east. All of the islands have volcanic origins. The islands were settled several centuries ago. Mount Pico, on the island of Pico, is the highest point in Portugal, at 2,351 m. If measured from their base at the bottom of the ocean to their peaks, which thrust high above the surface of the Atlantic, the Azores are among the tallest mountains on the planet.

The Azores are located above an active triple junction between three of the world’s major tectonic plates (the North American Plate, the Eurasian Plate and the African Plate. The Mid-Atlantic Ridge is the main frontier between the North American Plate and the African-Eurasian Plates that crosses the Azores Plateau between the islands of Flores and Faial from north to south then to the southwest; it is an extensive form crossed by many transform faults running perpendicular to its north–south orientation, that is seismically active and susceptible to volcanism.

The climate of the Azores is very mild for such a northerly location, being influenced by its distance from the continents and by the passing Gulf Stream. Because of the marine influence, temperatures remain mild year-round. Daytime temperatures normally fluctuate between 16 and 25 °C depending on season. It is generally wet and cloudy. Its main industries are agriculture, dairy farming, livestock, fishing, and tourism, which has become a major service activity in the region. The largest city of the Azores is Ponta Delgada.

Traveling in Corona virus times can be challenging. Our flight from Oslo was delayed for 2-3 hours because of a late incoming flight. This meant not reaching our next flight from Lisbon. Fortunately we were notified before check-in so we were able to re-pack our luggage, and with only hand luggage we could avoid a lot of extra delays.

We had to use face masks that we had to use all the way from boarding to disembarking. We waited in the transit dining area for an hour or two until our group leader had managed to arrange hotel for the night. Then we took taxies to the Marriott Hotel where we got nice rooms.

São Miguel Island, nicknamed “The Green Island”, covers 760 km2 and has around 140,000 inhabitants, with 45,000 people residing in Ponta Delgada, the largest city. There are three large craters/calderas on the island: Furnas in the East, Fogo in the center, and Sete Cidades in the west – all with large lakes.
After arriving in São Miguel airport we drove straight to the Furnas caldera. First we visited hot springs at the Furnas Lake where they baked food underground. Then to the town of Furnas for lunch. After lunch we walked to the nearby waterpark to have a swim in the yellow-brown sulphur-smelling water. In Furnas there was also cold and hot springs, and in one small geyser they cooked corn cobs. On our way back to Ponta Delgada we stopped at a tea plantation.

The Sete Cidades volcano is situated on the west part of the island, with an almost circular caldera (5 km in diameter and up to 400 meters high walls). Two crater lakes Lagoa Azul (blue), and Lagoa Verde (green), with a bridge in between. The village of Sete Cidades is surrounded by farmland. In the western end of the crater, in an area of open parklands, a 1.2 km tunnel containing water pipes and a footpath links the crater to the village of Mosteiros.
We started our tour by walking several kilometers along the crater rim. After visiting the village we walked along the lake to the parklands where we had a picnic lunch. Before heading back to Ponta Delgada we could chose cycles or kayaks – or simply wait in a café. Before returning to our hotel we visited a pineapple plantation.

Before we departed for Pico Island some of us joined an optional whale watching tour. Our boat headed directly for an area where whales had been spotted from one of the many watch towers located around the islands. Lookouts on guard inform the tour boats where sperm whales are sighted. About half an hour from port we saw several large sperm whales. We only saw their backs above water, and their blow. The males can be up to 18 meters long. Closer to the island we watched dolphins.

After a good lunch in a local restaurant we headed for the airport to fly over to Pico island. The island was mostly covered by clouds, but Mount Pico (2,351 m) towered above the clouds. Pico is actually the tallest mountain in Portugal.
After we landed we met our new local guide, and we drove along the south coast to our Fonte Resort hotel in the Silveira area.
After lunch we headed for a swim in the Atlantic Ocean, but found out that the “beach” was simply a “sea access” where we had to climb a steep path down between lava boulders.  We climbed a ladder into the sea, and were rewarded with clear and reasonably warm water.

We started our tour with hiking along the western coastline in a vineyards landscape with lava-stone walls. This area is now a UNESCO World Heritage Site. The vine culture on Pico Island began in the late 15th century with the settlement of the island. Next stop was a whaling industry museum in São Roque do Pico, in an old whale oil/flour factory. After a picnic lunch in the town we stopped for wine tasting before heading back across the island – up through the clouds on the high plain, and to down to the town of Lajes do Pico on the sunny south coast (not far from our hotel). After a stroll in the town and a stop at a café we drove back to our hotel. This afternoon we found a proper place to swim – a local recreation area where they had built a jetty at some boulders with a small lagoon in between.

We took the ferry over from Madalena to Horta. First stop was to see the crater at the central caldera, which was only partly visible because of fog/clouds. We also visited the volcano museum and lighthouse at the westernmost point.  We had an hour’s stop in the town of Horta before taking the ferry back to Pico.

Pico Island is dominated by the 2351 meter high Pico volcano, but has a central plain at about 800 meters. Some of us joined an optional tour where we hiked 11 kilometers from the central plain down to Baía de Canas on the north coast. We had a picnic lunch at the Prahina forest park by the costal road before descending the steeper part of the trail.

In the afternoon we relaxed and had a swim in the Atlantic Ocean. Looking south there is open water 12.000 km southwards to Antarctica, passing the Cap Verde Islands after only 2.500 km.

Our tour is coming to an end. Late morning we drove across the Pico highland to the airport. then a short flight back to São Miguel island where we had a tour to the central caldera before returning to our hotel in Ponta Delgada. After our farewell dinner we returned to our hotel to pack for the return flight to Lisbon and Oslo.

Early start to the airport. Transit in Lisbon. Boarded our Oslo flight on time. Then 1-1/2 hours waiting for European airspace before we could take off.