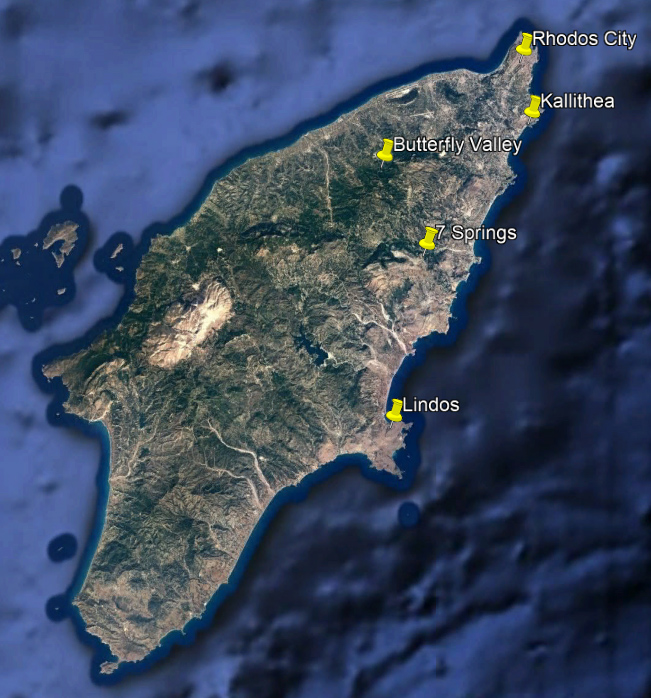 Rhodos or Rodos is the largest of the Dodecanese islands, 18 km from the southern shore of Turkey. The island is 79.7 km long and 38 km wide, with a total area of apx. 1,400 square km. The principal town is the city of Rhodos with about 50,000 inhabitants. Outside the city the island is dotted with small villages and spa resorts.

The Knights of Saint John of Jerusalem ruled the island from 1310 to 1522. Historically The island was very famous worldwide for the Colossus of Rhodos, one of the Seven Wonders of the Ancient World. The Medieval Old Town of the City of Rhodos has been declared a World Heritage Site. Today, it is one of the most popular tourist destinations in Europe.

The interior of the island is mountainous, sparsely inhabited and covered with forests of pine and cypress. While the shores are rocky, the island has arable strips of land where citrus fruit, wine grapes, vegetables, olives and other crops are grown.

The Rhodian population of fallow deer was found to be genetically distinct in 2005, and to be of urgent conservation concern. In Petaloudes Valley (“Valley of the Butterflies”), large numbers of tiger moths gather during the summer months. Mount Attavyros, at 1,216 metres, is the island’s highest point of elevation.

Rhodos has been occupied by many different people/powers throughout history: the Minoans, Mycenaeans, Dorians, Alexander the Great, Roman Empire, Crusaders, Ottomans, Italy/Germany (WWII) and Britain.

The Petaloudes Valley (known as Valley of the Butterflies by tourists) is home to thousands of tiger moths that cover the entire landscape after the wet season (late May) due to the high humidity in the area. The Oriental sweetgum trees in valley give off a scent that attracts the moths and creates a unique biotope. Owing to the increased number of visitors, the Tiger Moths are facing population issues as they have no stomach and when disturbed tend to fly frequently and thus deplete their energy.

One of the most charming destinations on Rhodes, Seven Springs (Epta Piges) offers a cool, magical landscape, a real oasis, even in the heat of high summer. Water flows out of the springs all year around, which is forming a small lake. The lake remains replenished thanks to a dam built by the Italians, in order to provide the nearby settlement Kolympia with fresh water.

The access to the lake you can to walk through a 186 m long very narrow dark tunnel. The tunnel, constructed back in 1931, leads the water of the seven springs and river Loutanis to the lake. As an alternative route you can simply follow a walking path to the lake.

Lindos is located about 40 km south of the town of Rhodes in a large bay and its fine beaches make it a popular tourist and holiday destination.

Lindos was founded by the Dorians about the 10th century BC, and by the 8th century it was a major trading centre. The importance of Lindos declined after the foundation of the city of Rhodes in the late 5th century BC. In classical times the acropolis of Lindos was dominated by the massive temple of Athena Lindia, which attained its final form in around 300 BC. In early medieval times these buildings fell into disuse, and in the 14th century they were partly overlaid by a massive fortress built on the acropolis by the Knights of St John to defend the island against the Ottomans.

The ‘Old City’ with the Palace of the Grand Master of the Knights of Rhodes lies within thick walls. In this video we enter through the north gate. We walk through narrow streets and down the main street – Socrates street – and out through the south gate. Then we follow the pier passing the Mandraki harbour to Elli beach.

A typical Rhodos day is spending the day on the beach, if not going on sightseeing, having lunch somewhere, and having a afternoon nap at your hotel.

Then in the evening you would probably walk down to Mandraki and have something to drink while watching people in this harbour area. After a while, or skipping Mandraki, you would continue into the old town. Here you will be strolling up the Socrates street, and if not dining in the old town you would return to dine in the hotels area.