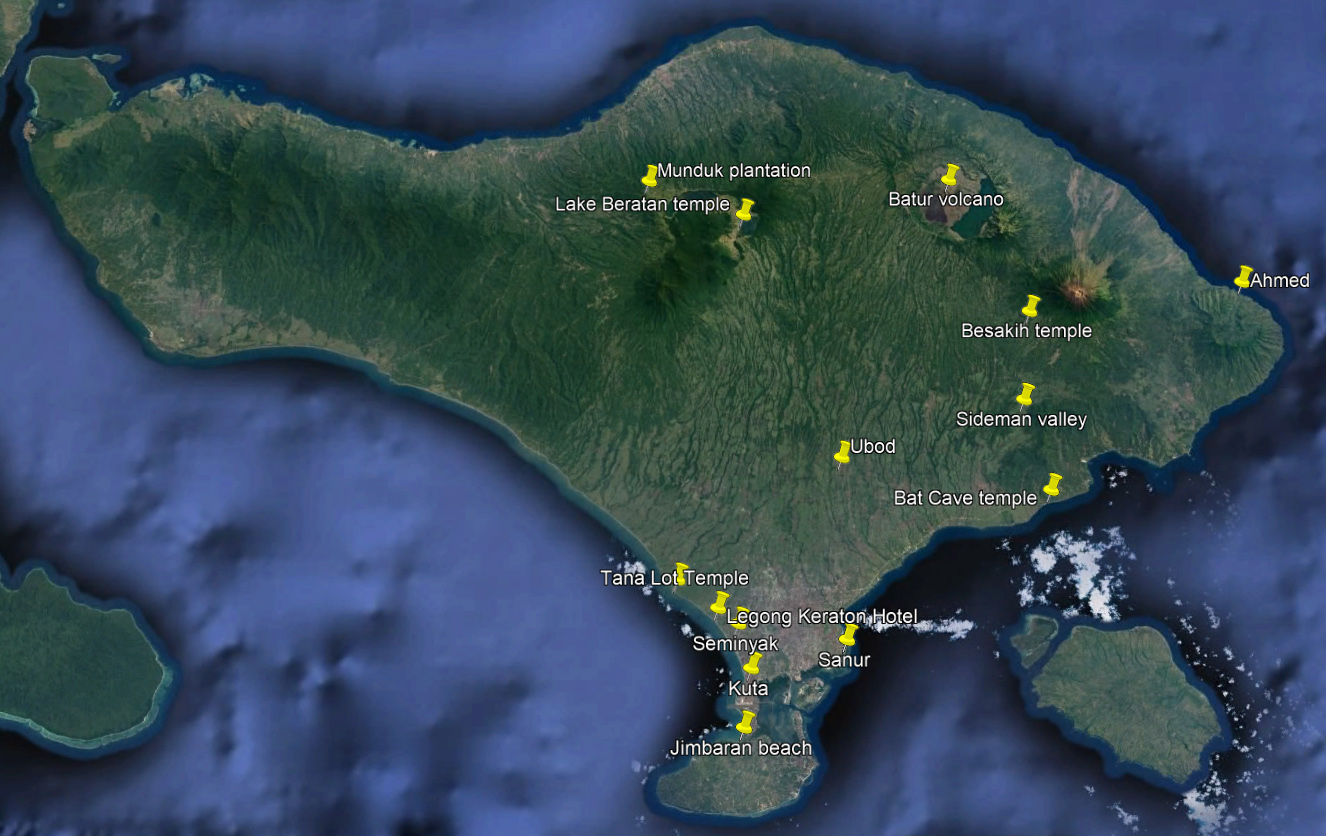 Bali is an island and province of Indonesia with a population of almost 5 million. About 84 % is Balinese Hinduism,  13% Muslim,  2.5% Christians and 0.5% Buddhists. Tourism-related business makes up 80% of its economy. Bali is renowned for its highly developed arts, including traditional and modern dance, sculpture, painting, leather, metalworking and music. The highest mountain is Mount Agung (3,031 m), which is an active volcano rated as one of the world’s most likely sites for a massive eruption within the next 100 years. Its tall mountain ranges provide the high rainfall that supports the agriculture sector. South of the mountains is where most of Bali’s large rice crop is grown. The northern side of the mountains is the main coffee producing area, along with rice, vegetables and cattle. The largest city and provincial capital, Denpasar, and Ubud is the island’s cultural center.
I have visited Bali in 2003, 2015 and 2018.

The last stop on our Indonesia tour in 2018 was in Bali. We stayed a few relaxing days in a nice hotel in the Sanur area. Unfortunately it was not a beach-front hotel, but it was just a few minutes walk to the beach.

There is a paved walkway along beach which was nice to walk in the mornings and evenings. The sun rise on this side of the island, and if there are no clouds you will see the mount Agung volcano in the horizon.

During our stay in Sanur I had the chance to visit my brother in the Badung/Seminyak area. We met at the beach next to Finns Beach Club and enjoyed cool drinks and the usual nice sunset, watching surfers and listening to music together with hundreds of other people.

“What separates La Laguna from the crowd is the extraordinary decor. Semi-cobbled paths, ornate, vintage wooden gypsy caravans and multi-coloured furniture with alfresco seating scattered over the garden and leading down to the lagoon and opening out to the expansive Bali shoreline and the famous Bali sunsets.”,

I walked down the beach before sunset from our Legong Keraton Hotel to book a table for our last dinner in Bali before flying home to Norway.

The dinner and atmosphere at La Laguna was great as usual.

Overnight trip to Amed on the east coast – a nice and quiet place. However to get there you have to battle the heavy Bali traffic. As soon as you leave the south coast the traffic is not too bad. On the way we stopped at the Bat Cave temple (Pura Goa Lawah), and had lunch in Bloo Lagoon Eco Village in the Blue Lagoon area.

In Amed we stayed in the Wawa-wewe II villas – a very quiet place where we could relax.

On the way back we drove inland crossing the Sidemen valley. We had a coffee stop at the Darmada Eco Lodge.

Driving north from our Legong Keraton Hotel we avoided the heavy traffic in the Denpasar/Kuta area. Stopping once to watch the view as the road climbed into the hills.

Lake Bratan, at the town of Bedugul, is a quiet and fresh place compared to the coastal areas. We walked through the Ulun Danu Bratan Temple area down to the lake.

Passing the other two lakes we continued uphill  and had lunch in the Munduk Coffee Plantation Villa and Spa (see map) – a very nice and quiet place. We had a heavy rain shower, but as usual it cleared after half an hour.

Morning on the beach
Bali, November 2015

It is always nice to walk along beaches in tropical mornings before it gets to hot.

Sitting in the garden at the Legong Keraton Hotel watching early surfers, walking along the beach, and watching beach chairs and parasols being set up was nice.

One week in paradise as travel companion for my mother, visiting my brother to see their new house.

–> Click on the picture to open the photos in Flickr. Then press the button in the upper right-hand corner.

2003:
We visited Bali during the SARS epedemic when there was a 90% reduction of tourists. The streets in Sanur was almost empty in the evenings, and most restaurants, bars and cafes only had a few visitors – or none at all. People chose to eat at restaurants where they saw other guests, expecting the kitchen to have fresher food.  In our hotel only a handful of the many rooms were occupied, and one day the employees had a meeting in the garden where they discussed the possibility of being temporarily laid off.

Tour to Bedugul/Lake Bratan
Bali, May 2003

Driving north from Sanur. Stopping at a butterfly park, and then at Yeh Panes resort with hot springs. Driving up in the hills we passed beautiful rice terraces, and stopped at a place where they prepared decorations for a Ceremony. We stopped to have lunch at a restaurant with a nice view of the rice terraces.

We continued through the town of Bedugul to the Lake Bratan area. We parked and walked through the temple area down to the lake. Next to the temple some people showed us several animals – like a small zoo.  Thereafter we headed back to Sanur.

Tanah Lot is a small island in the sea on the south coast west of the city and home of the ancient Hindu pilgrimage temple Pura Tanah Lot (literally “Tanah Lot temple”), a popular tourist and cultural icon for photography. At low tide it is possible to walk over to the temple, but at high tide that is impossible.

One afternoon we drove to Tanah Lot to see the place at sunset. There are restaurants on the hill overlooking the temple.

We hired a minibus to drive us up to Ubud – the cultural centre of Bali. On the way we stopped several times to see local handcraft: Batik, wood carving, silverware and paintings. In Ubud we visited the Ubud Palace.

Dining at Jimbaran Beach
Bali, May 2003

Jimbaran is a fishing village and tourist resort located south of the airport. Along the beach there are seafood restaurants and luxury hotels. I had dinner there with my brother and parents. This is a nice place to watch the surfers and beautiful sunsets.

Besakih Temple is a pura complex in the village of Besakih nearly 1000 meters up the slopes of Mount Agung. It is the most important, the largest and holiest temple of Hindu religion in Bali. It is an extensive complex of 23 separate, but related temples, with the largest and most important being Pura Penataran Agung. The temple is built on six levels, terraced up the slope. The entrance is marked by a candi bentar (split gateway), and beyond it the Kori Agung is the gateway to the second courtyard.

Mount Batur is an active volcano located at the center of two concentric calderas North West of Mount Agung. The south east side of the larger 10×13 km caldera contains a caldera lake. The inner 7.5-kilometer-wide caldera, which was formed during emplacement of the Bali ignimbrite, has been dated at about 23,670 and 28,500 years ago. The first documented eruption was in 1804 and the most recent was in 2000.

The road follows the rim of the caldera. There are several restaurants located along this road, and we had lunch in one of them.

Ngaben, also known as Pitra Yadyna, Pelebon or cremation ceremony, is the Hindu funeral ritual of Bali. A Ngaben is performed to release the soul of a dead person so that it can enter the upper realm where it can wait for it to be reborn or become liberated from the cycles of rebirths. Once the corpse is ready for the cremation ground, it is washed, dressed in Balinese attire, family and friends pay their last goodbye with prayers and the mourners take it for cremation. At the cremation ground, the corpse is placed into the bull-shaped lembu or temple-shaped wadah, final hymns are recited and the cremation pyre lit. Twelve days after the cremation, the families collect the ashes, fill it inside coconut shell, carry it to nearby ocean or sea to return the remains back to the elements.

Together with my brother and parents we drove to Amed to stay overnight. On the way we stopped in Smarapura to see the Klungkung Palace. Thereafter we stopped at the Bat Cave temple.

We stayed at a nice and quiet hotel at the beach, and had a beautiful sunset during our dinner. Next morning we walked along the beach and watched the sunrise.

On our way back to Sanur we stopped at the Tirta Ganga (water palace).

Kecak is a form of Balinese Hindu dance and music drama that was developed in the 1930s. The dance is based on the story of the Ramayana and is traditionally performed in temples and villages across Bali. Also known as the Ramayana monkey chant, the dance is performed by a circle of as many as 150 performers wearing checked cloths around their waists, percussively chanting “chak” and moving their hands and arms. The performance depicts a battle from the Ramayana, in which the monkey-like Vanaras, led by Hanuman, help Prince Rama fight the evil King Ravana. Kecak has roots in sanghyang, a trance-inducing exorcism dance.