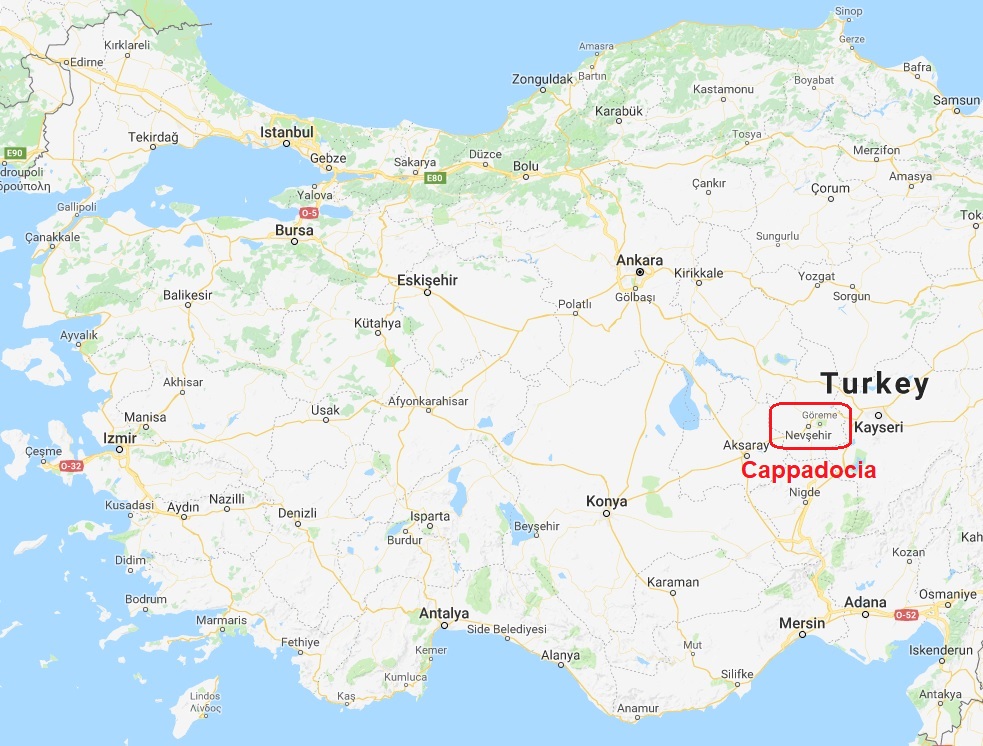 Cappadocia is a historical region in Central Turkey – a region of exceptional natural wonders, in particular characterized by fairy chimneys and a unique historical and cultural heritage. The rocks of Cappadocia near Göreme eroded into hundreds of spectacular pillars and minaret-like forms. People of the villages at the heart of the Cappadocia Region carved out houses, churches and monasteries from the soft rocks of volcanic deposits.
The first period of settlement in Göreme goes back to the Roman period. The Göreme Open Air Museum complex contains more than 30 carved-from-rock churches and chapels, some having superb frescoes inside, dating from the 9th century to the 11th century.
The most important towns and destinations in Cappadocia are Ürgüp, Göreme, Ihlara Valley, Selime, Guzelyurt, Uçhisar, Avanos and Zelve. Among the most visited underground cities are Derinkuyu, Kaymakli, Gaziemir and Ozkonak. The best historic mansions and cave houses for tourist stays are in Ürgüp, Göreme, Guzelyurt and Uçhisar. Hot-air ballooning is very popular in Cappadocia and is available in Göreme. Trekking is enjoyed in Ihlara Valley, Monastery Valley (Guzelyurt), Ürgüp and Göreme.

Stop at a Mevlana Mosque/Museum on our way to Cappadocia
Konya, Turkey, October 2012

This tourist destination is the tomb of the famous mystic, sufi, and thinker Rumi (known as Mawlana Jalal ad-Din Muhammad Balkhi-Rumi in English literature). One enters the mausoleum and the small mosque through doors decorated with Seljuk motifs and a Persian text dating from 1492. It leads into the small Tilavet Room decorated with rare and precious Ottoman calligraphy in the Sülüs, Nesih, and Talik styles. In this room the Koran was continuously recited and chanted before the mausoleum was turned into a museum.  The neighbouring museum displays relics of his life and his time – old manuscripts, hand written copies of the Koran, musical instruments used at Rumi’s time, and many art works dating from the Seljuk era.

Cappadocia lies in central Anatolia, in the heartland of what is now Turkey. The relief consists of a high plateau over 1000 m in altitude that is pierced by volcanic peaks.

A fairy chimney (hoodoo) is a tall, thin spire of rock that protrudes from the bottom of an arid drainage basin or badland. Fairy chimneys may range from 1.5 to 45 meters consist of relatively soft rock topped by harder, less easily eroded stone that protects each column from the elements. They generally form within sedimentary rock and volcanic rock formations. Hoodoos are a tourist attraction in the Cappadocia region of Turkey, where houses have been carved from these formations.

During our visit to Cappadocia I could not resist to fly over the fantastic landscape in a hot-air balloon.

We were picked up at our hotel while it was still dark. After a short minibus ride we arrived at the balloon site where we got some snacks (light breakfast) while we watched the crew filling the balloon with hot air.
When ready we climbed into the basket, and we lifted off. Up in the air we noticed that there were about 70 other balloons in the air at the same time! We floated over a fantastic landscape.

Pasabag in Cappadocia is located on the road to Zelve, coming from Goreme or Avanos. Highly remarkable earth pillars can be seen here. This site is also called Monks Valley. The name was derived from some cones carved in tuff stones which stand apart. Currently, there is a vineyard and a number of tuff cones standing right next to the road. Some of these cones split into smaller cones in their upper sections, in which stylites and hermits once hid. A chapel dedicated to St. Simeon, and a hermit’s shelter is built into one of the fairy chimneys with three heads. The entrance of the cell is decorated with antithetical crosses.

Çavuşin is a village on the road between Avanos and Göreme, about five kilometers north of Göreme. At the Cavusin old town, the church of St. John the Baptist rises on top of the hill. The church was built in the 5th century and it is the biggest cave church of Cappadocia even though it was divided into three rooms in 10th century against danger of collapsing. Most of the frescoes of St. John the Baptist church are faded by smoke but there are still some visible ones. Its cathedral-like proportions are also astounding.

Uçhisar is dominated by a 60-metre-high castle-mountain. This massif is crisscrossed by numerous underground passageways and rooms. They served as residential areas, as well as cloisters in Byzantine times. Originally, around 1,000 people lived in the castle. The Hittites may have used the natural structures of the cliffs as refuges and strongholds against possible attacks. The camouflage of the buildings provided an improved defence against attackers. The landscape is also marked by the fairy chimneys scattered through it.
During our visit in Cappadocia we stopped in the town of Uschisar for a rest. Unfortunately we did not get a chance to explore this extraordinary town.

The entire town is dominated by a 90-metre-high rock-castle. It is an extraordinary example of the rock-cut architecture which is typical of the region and served as a refuge from attackers in Byzantine times. Aside from the rock-cut buildings, Ortahisar is characterised by a series of simply constructed structures similar in design and rough in appearance. The upper houses are made of blocks of tuff, mostly without mortar. These buildings which were only used for the storage of food in earlier times. The upper floor is often accessed by an exterior staircase made of tuff-stone slabs. The exterior walls are covered with white limestone and capped with simple cornices.

Sufi whirling is a form of physically active meditation which originated among certain Sufi groups, and which is still practiced by the Sufi Dervishes of the Mevlevi order and other orders such as the Rifa’i-Marufi. It is a customary meditation practice performed within the Sema, or worship ceremony, through which dervishes aim to reach the source of all perfection, or karma. This is sought through abandoning one’s nafs, ego or personal desires, by listening to the music, focusing on God, and spinning one’s body in repetitive circles, which has been seen as a symbolic imitation of planets in the Solar System orbiting the sun.

We drove to Avanos one evening to see a dance show. First we were served wine, Raki and snacks. The dances included classical Turkish dances, and belly dancers. Being a tourist show, guests were encouraged to participate a few times.

During a visit to a carpet factory we were shown how they extract silk treads from the silk cocoons made by the silk worms.

Extracting raw silk starts by cultivating the silkworms on mulberry leaves. Once the worms start pupating in their cocoons, these are dissolved in boiling water in order for individual long fibres to be extracted and fed into the spinning reel.

We stopped at a carpet shop/warehouse where they showed us different types of carpets. We were encouraged to buy – very easy, just pay and we will deliver at your door at home! There were of course many beautiful carpets, but very expensive because of their good quality.

On our way back to Antalya we stopped near the village of Saratli to visit an underground city. It contains vital places such as barn, kitchen, water wells, tandoor, stove, warehouse roofs, and the connections between these spaces are provided by corridors on three floors/levels. The underground city is dated to the Byzantine period.
Cappadocia has several underground cities initially inhabited by the Hittites, then later by early Christians as hiding places. They are now archaeological and tourist sites, and are not generally occupied. The latest large underground city was discovered in 2007. It was a stopover on the Silk Road, allowing travellers and their camels to rest in safety underground, in a ‘fortress’ equivalent to a modern hotel.