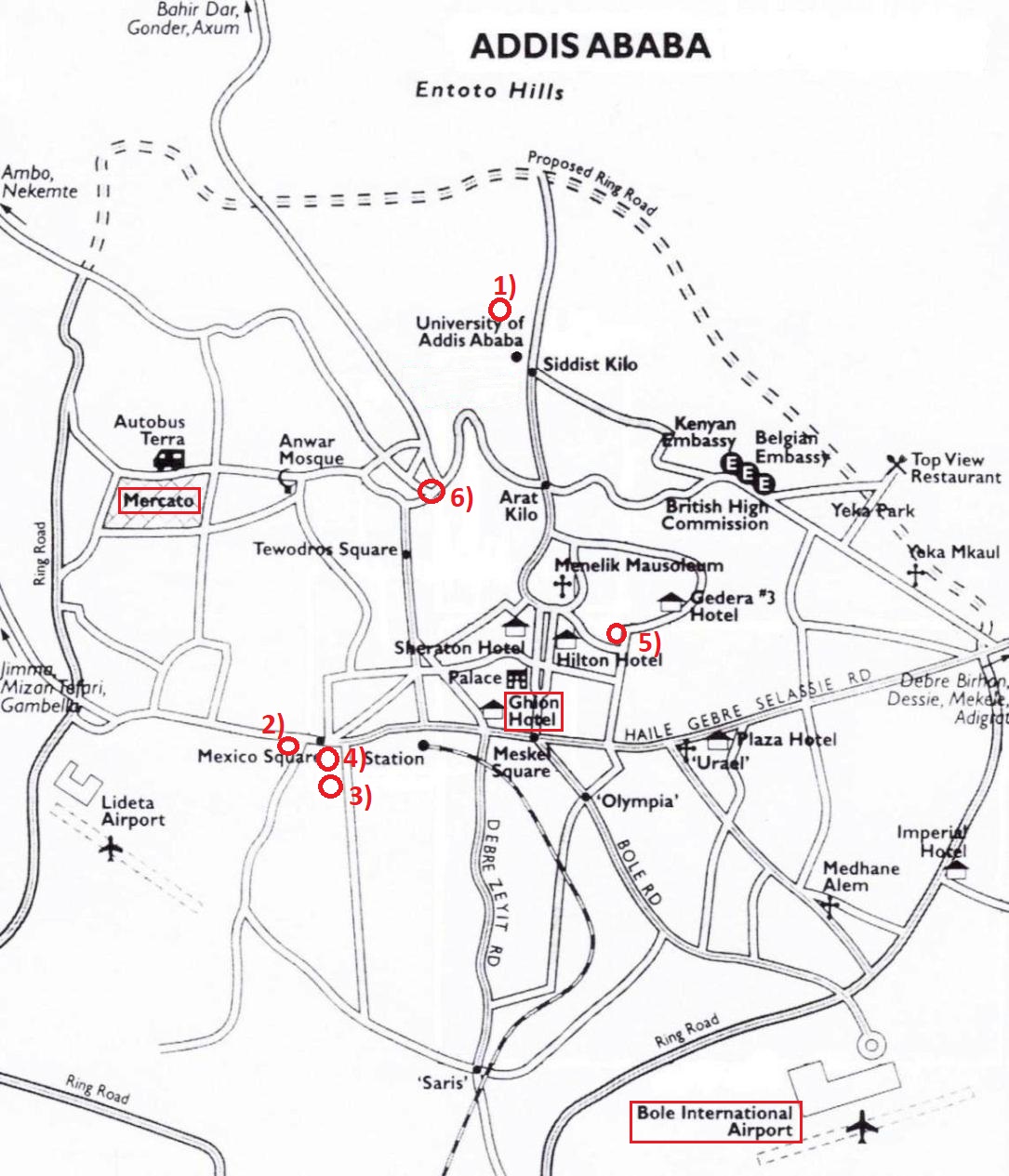 Addis Ababa “new flower” is the capital and largest city of Ethiopia. The city lies at the foot of Mount Entoto about 2,500 meters above sea. The city has a population of about 5 million, which is 10 times more than in 1963-67 when our family lived there.

I re-visited Ethiopia in 2002 and 2008 and stayed in Ghion Hotel. When we first arrived in Ethiopia in 1963 the Bole Airport was not built, so we landed at the ‘old airport’, Lideta Airport (according to map), but departed from Bole Airport. In 2002 we landed at Bole airport, and in 2008 at the new Bole terminal.

Addis Ababa had about 400,000 in the 1960’s, and in 2020 the city has expanded to 2.7 million. Areas like Makanissa and Bole airport was outside the city in the 1960’s.
We rented horses in Makanissa (somewhere between the two airports on the map), crossed a river, and could ride south on an endless grassy plain. Today this area is part of the city. Further out than we rode is the ring-road today.

The city has spread out, but the central areas are mostly the same – even some of the old buildings that were in bad condition in the 1960’s are still standing!

(Short sequence from our family 8mm cine film).
Timkat, meaning baptism, is the Ethiopian Orthodox celebration of Epiphany. In Addis Ababa the highlight of celebration (at least for us foreigners) were the blessing of the water in a pool at Janhoy Meda (the race track), where the Emperor was present. We were allowed to watch from an area near the emperor. The priests blessed the water in the pool, and when this ceremony was finished everyone wanted some of the blessed water. Some even dipped in the pool, while others filled water in bottles to bring home.

On the grounds around the pool lots of priests and clergies were assembled in their colorful attire. There were also processions all around in the city that day.

(Short sequence from our family 8mm cine film).
Meskel is an annual religious holiday in the Ethiopian Orthodox church, which celebrates the discovery of the True Cross in the fourth century. The feast is held in Meskel Square in Addis Ababa in September, which is at the end of the rainy season. At that time the countryside is blooming with yellow flowers (Bidens pachyloma) that are called Meskel flowers.
The celebration starts with a procession that ends in Meskel Square where a large bonfire is ready to be lit. Foreigners were allowed to watch from the area between the Emperor’s place and the priests, were we had a good view of the events. When it gets dark the fire is lit.

(Short sequence from our family 8mm cine film).
The Norwegian community in Ethiopia looked forward to our king’s visit. Almost all Norwegians met at the airport and lined up to greet him At the Norwegian Mission School us children lined up along the driveway and looked forward to see our king, as we imagined him in full regalia with a crown on his head, to walk past us. We were disappointed when he drove up, and was also dressed in ordinary clothes!

We sang for him, and there were speeches, and thereafter he did the official opening of the new school building. Of course our king attended several meetings and dinners and visited many places in Ethiopia, but this we children did not know much about that.

Link to photos on Flickr: Addis Ababa in the 1960's

A selection of photos from the Addis Ababa area, taken by my mother and father during our years in Ethiopia.

Addis Ababa was now about 10 times larger than when we left the country in 1967. We only had 1 full day + 2 evenings in Addis Ababa this year. I did manage to find and visit the house we rented in 1964-65, which was now a clinic.

The pool at Ghion Hotel where we learnt to swim. A walk from the Piazza past the Mosvold department store, up to the St.George cathedral, the Arada post office, and back to the Piazza. I managed to get into all the 3 different houses we rented, my father´s office, and the Norwegian Mission School.
A family lived on our first house (1963-64). Our second house (1964-66) was now part of a clinic, where our living room was a physiotherapy room. Our third house (1966-67) was now used by a paint company. Our living room was now a storage room, closed off from the rest of the house. Our kitchen was the secretary´s office, and my bedroom was the manager´s office.

Visiting other places I remembered from our time in Addis Ababa during 1963-67.
First stop was a visit to my taxi driver´s aunt who lived along the river above the Makonnen Bridge, and then a re-visit to our first house.
Up at the Entotto mountain we stopped at Emperor Menelik´s first palace, then the two old churches, including a cliff church (more like a cave).
Back in Addis we visited the National museum where we saw the “Lucy” skeleton and the thrones of Emperor Haile Selassie.
Then we drove to the market area “Mercato” where we walked around.

This museum is located in an annex to the main post office building. It contains an almost full set of Ethiopian stamps in frames that can be pulled out for viewing. There are also stamps and things from many other countries in the museum.

My friend Wondimu arranged for a private tour with the department manager and the manager of the museum.

Have a look at my Ethiopian stamps.

Driving in Addis Ababa and up to Entotto, March 2008

On my last day Binyam drove me around in Addis Ababa to shops and to meet friends.

In the evening we drove up over the Entotto mountain to the Sululta plain. It took longer time than I expected, so we turned around and drove back to my hotel. I was getting up at 01:30 am next morning to fly back to Norway, and I needed the sleep.