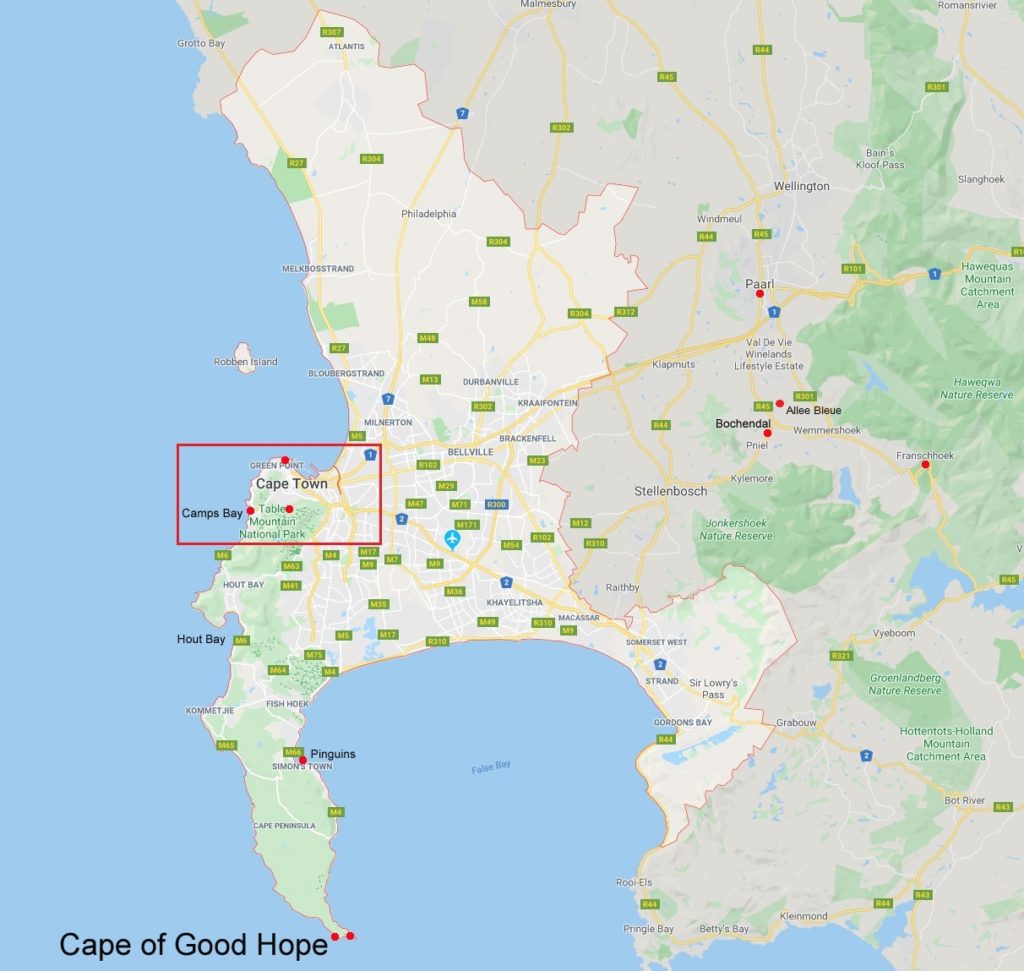 The rectangle on the map indicates the central business district, Table Mountain, Waterfront and Camps Bay.

The area below is the Cape peninsula. East of Cape Town area is Stellenbosch and the wine district.

Cape Town (Afrikaans: Kaapstad) is located on the shore of Table Bay, and is the oldest urban area in South Africa. It was developed by the United East India Company (VOC) as a supply station for Dutch ships sailing to East Africa, India, and the Far East. Jan van Riebeeck’s arrival on 6 April 1652 established VOC Cape Colony, the first permanent European settlement in South Africa. Cape Town outgrew its original purpose as the first European outpost at the Castle of Good Hope, becoming the economic and cultural hub of the Cape Colony. Until the Witwatersrand Gold Rush in 1886 and the development of Johannesburg, Cape Town was the largest city in South Africa.

The mountain is often covered by clouds, and this day was one of those. Having come all the way from Norway we agreed that we just had to get up there. Luckily the the Aerial Cableway was operating dispite thick clouds and quite strong winds.
The main feature of Table Mountain is the level plateau approximately three kilometres from side to side, edged by impressive cliffs. The plateau, flanked by Devil’s Peak to the east and by Lion’s Head to the west, forms a dramatic backdrop to Cape Town. This broad sweep of mountainous heights, together with Signal Hill, forms the natural amphitheatre of the City Bowl and Table Bay harbor. The highest point on Table Mountain is towards the eastern end of the plateau is 1,086 meters – 19 metres higher than the cable station at the western end of the plateau.

Here are some scenes from “Kaapse Stories from the Mother City” at The Rockwell Theatre in Cape Town. This was is a unique and fun dinner experience that celebrated the spirit of the diverse people who populated District 6 at the foot of Table Mountain. The story is in memory of District 6 that was completely demolished in the 1970th .  We enjoyed classic songs made famous by artists such as Miriam Makeba, Freddie Mercury and even Shakira. The food was also excellent. We can recommend this show!

Driving from Cape Town to Cape of Good Hope

Driving along the coast from Cape Town passing expensive bungalows overlooking the sea, we had our first stop at Camps Bay to look at the beach with tall waves under a cloud covered Table Mountain.

After a stop with a view of Hout Bay we followed the Chapman’s Peak Drive to Noordhoek Beach.

Then across to Misty Cliffs and Scarborough before reaching the Cape peninsula and Cape of Good Hope.

The Cape of Good Hope is a rocky headland on the Atlantic coast of the Cape Peninsula, and is the south-westernmost tip of Africa.

It is not the southern tip of Africa. The southernmost point is Cape Agulhas about 150 kilometers to the east, where the warm-water Agulhas current from the Indian Ocean meets the cold-water Atlantic Benguela current from Antarctica. That oceanic meeting point fluctuates between Cape Agulhas and Cape Point (about 1.2 kilometers east of the Cape of Good Hope).

Cape Point is the cliff with the lighthouse at the end of the Cape Peninsula, close to Cape of Good Hope. To get to the top you can either walk, or take the funicular almost to the top. The view from the top is fantastic and dramatic.

The light of the Cape Point lighthouse is the most powerful on the South African coast, with a range of 63 kilometers. It cannot be seen from the West until ships are at a safe distance to the South.

Simon’s Town is located on the shores of False Bay, on the eastern side of the Cape Peninsula.

Boulders Beach is located a few kilometers to the south of Simon’s Town. Here small coves and beaches are interspersed between boulders of Cape granite. There has been a colony of African penguins (Spheniscus demersus) at Boulders Beach since 1985. There is no record of the birds having lived here prior to that date. There are only three penguin populations on the mainland in southern Africa; the others are close to Hermanus at Stoney Point and Betty’s Bay.

There are several vineyards in the Stellenbosch region North-East of Cape Town. Allee Bleue Wine Estate is located between Stellenbosch, Paarl and Franschhoek. The French Huguenots arrived in the Cape in the late 1600s and settled in what became known as Franschhoek, or ‘French Corner’. The Huguenots planted vines as the land was perfectly suited to the production of wine.
Allée Bleue was bought in 1999 by Friedrich-Wilhelm and the late Elke Dauphin, who were determined to breathe new life into the estate. “Allée Bleue offers visitors a unique experience – world-class wines, fruit and herbs, stunning event and conference venues, a bistro and picnic venue, a fresh produce shop, warm hospitality, historic charm and contemporary art, surrounded by the breathtaking scenery of the Franschhoek Valley”