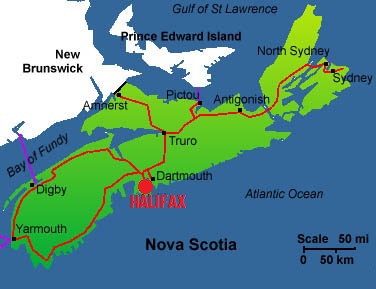 Halifax is the capital of the province of Nova Scotia. It had a population of about 400,000. Downtown Halifax is a major shopping area with about 200 restaurants and bars, and more than 60 sidewalk cafes that are open in the summer months. At the waterfront the popular 3 km Harbourwalk is home to a Halifax Transit ferry terminal, hundreds of stores and Historic Properties. Cruise ships visit Halifax frequently.

On a hill above the city is the Citadel Hill (Fort George). The Maritime Museum of the Atlantic includes a large exhibit on the famous Titanic, over 70 small crafts, and a 200-foot steamship. In summertime the preserved World War II corvette HMCS Sackville operates as a museum ship. The Art Gallery of Nova Scotia is housed in a 150-year-old building containing nearly 19,000 works of art.

Link to my photos on Flikr

When opened in Flickr, press the full-screen symbol in the uppper right-hand corner.

On my way back from Sydney to Norway I had to wait half a day for my connection flight to Europe through St. Johns. Instead of waiting 6-8 hours in the airport I took a bus into Halifax. I walked the streets, visited several museum and the fort, several shopping malls, had lunch and several coffee stops to kill time.

The weather was cold but good. When I boarded the aircraft in the evening it started snowing. I got out in time…