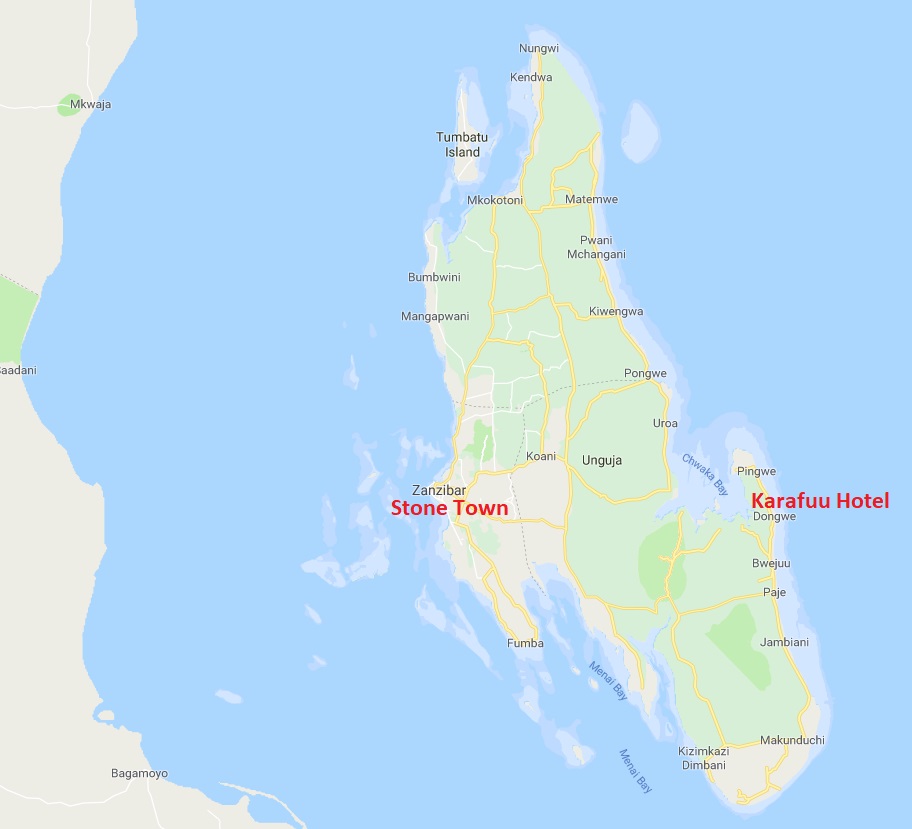 Zanzibar is a semi-autonomous region of Tanzania. It is composed of the Zanzibar Archipelago in the Indian Ocean, 25–50 kilometres off the coast of the mainland, and consists of many small islands and two large ones: Unguja (the main island, referred to informally as Zanzibar)  and Pemba Island. The capital is Zanzibar City, located on the island of Unguja. Its historic centre is Stone Town, which is a World Heritage Site.
Main industries are spices, raffia, and tourism. In particular, the islands produce cloves, nutmeg, cinnamon, and black pepper. For this reason, the Zanzibar Archipelago, together with Tanzania’s Mafia Island, are sometimes referred to locally as the “Spice Islands.
Zanzibar is the home of the endemic Zanzibar red colobus monkey, the Zanzibar Servaline Genet, and the extinct or rare Zanzibar Leopard.

Zanzibar may have been home to humans for at least 20,000 years. Vasco da Gama‘s visit in 1498 marked the beginning of European influence, and in 1503 Zanzibar became part of the Portuguese Empire. The islands were ruled by the Sultan of Oman from 1698 and was the centre of the Arab slave trade. In 1822 the British consul in Muscat put pressure on Sultan Said to end the slave trade. In 1890 the Zanzibar became a British protectorate that lasted until Zanzibar was merged with Tanzania when it became independent in 1963.

We landed on the airport and the bus took us through the outskirts of Stone Town before crossing the island to the East coast. We passed through a forest were the Red Colobus Monkeys live, but we did not see any.
There are several hotels along the east coast, and our Karafuu Beach Resort Hotel was a short drive up the coast. We were welcomed with soft drinks and an introduction about the place. Our group had reserved standard rooms, and we got one quite far from the beach. It seemed hot and had no view. I decided to pay extra, and we got a large bungalow down by the pool and beach. This was a very beautiful hotel and area. In the afternoon we strolled along the beach. My daughter had a free introduction dive in the pool, and later she was allowed to dive with us on the reef.

One day someone from our group was going out to snorkel on the reef, and we joined to scuba-dive. My daughter was allowed to join us after I had gone through the diving manual with her, and a Dive Master was to accompany her.

We were taken out into the beautiful lagoon, and descended into a wonderful world of coloured fishes. My daughter was relaxed and behaved correctly between the Dive Master and myself, and we ended up with diving down to 12 meters. She was one big smile when we came up. A second introduction dive on a coral reef was a memory for life.

The food in Karafuu was fantastic. Large buffets every evening.
One evening they served the food outside in a nice BBQ area. Again lots of delicious food in the warm African night. – I wish I was there now!

After visiting a local shipyard to see traditional boat building, the sultan’s bath, and a spice garden (in heavy rain) we had lunch. Then we walked through narrow streets down to the old slave market.

Stone Town was host to one of the world’s last open slave markets, presided over by Arab traders until it was shut down by the British in 1873. The slaves were shipped here in dhows from the mainland, crammed so tightly that many fell ill and died or were thrown overboard. Until they were sold they were chained in pits in the ground or in crowded cellars with little air and no food or toilets.

Almost every morning we walked along the beach to see the sunrise and look for beautiful seashells.

Du to the tsunami the year before the beach had been washed out, and the sand moved out into the lagoon. The old coral reef was bared, and to reach the lagoon they had built a walkway to avoid all the sea urchins at low tide. They said that within a year all the waves would move the sand back onto the beaches.

When we arrived the tide was coming in with water from the lagoon that had been warmed during the day, and the temperature was at least 35 deg.C.

March 2006: Flying above Kilimanjaro heading for Nairobi and Europe

Our vacation was over, and we had to fly back to winter in Norway. We were lucky to fly over Mt. Kilimanjaro on our way from Zanzibar to Nairobi. In the old days the top of Kilimanjaro was said to be covered by an ice and snow cap. This year most of the snow and ice was gone due to global heating.