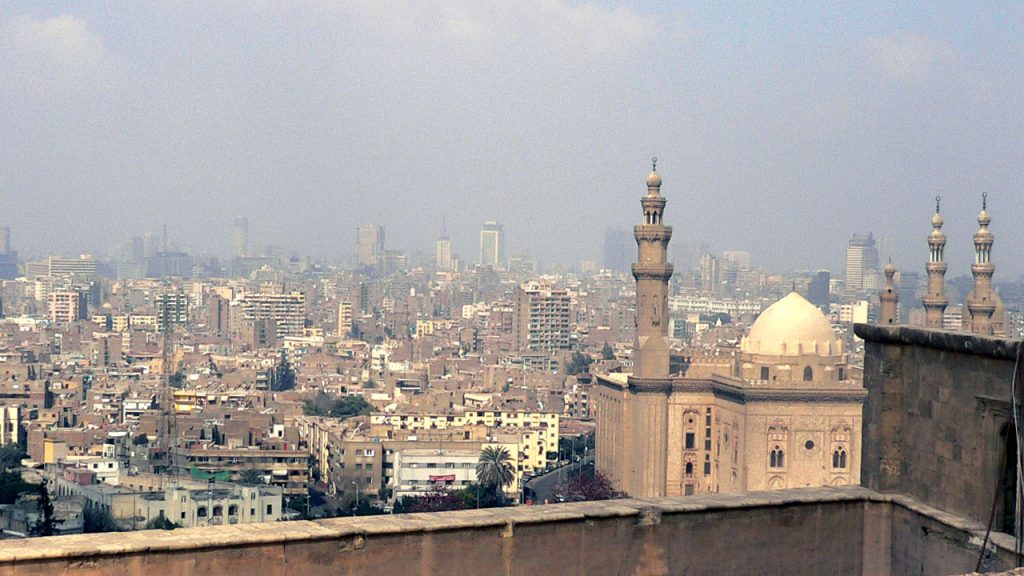 Cairo is a large dusty city with over 20 million people. The city’s metropolitan area is one of the largest in Africa. Located near the Nile Delta, modern Cairo was founded in 969 AD by the Fatimid dynasty, but the land composing the present-day city was the site of ancient national capitals whose remnants remain visible in parts of Old Cairo. Cairo has long been a center of the region’s political and cultural life, and is titled “the city of a thousand minarets” for its preponderance of Islamic architecture.

We stopped a few days in Cairo in May 1966 on our way from Addis Ababa to Oslo for a summer vacation during our 4 years in Ethiopia. We stayed in a quite central hotel, and had a local guide to drive us to the famous sites: Giza pyramids and Sphinx, the Cairo zoo, the bazars, and the museum to see Tutankhamun’s treasures.

I was 11 years old at that time (sitting behind my brother in this photo). It was allowed to climb the pyramids, but we did not have time for that. Instead we had a long lunch at our guides house – very boring for us children – and a dip in the pool at Mena House.

Because of attacks on tourist buses the past years, all the tourist buses going to Cairo met at a breakfast stop. From there we drove in convoy with police protection.

It was a very long drive, and we were glad we had booked a 3-day tour instead of driving back the next evening.

Our first stop was a the Citadel to see the Muhammad Ali’s alabaster mosque.

The Citadel is a fortified enclosure begun by Salah al-Din in 1176 AD on an outcrop of the Muqattam Hills as part of a large defensive system to protect both Cairo to the north and Fustat to the southwest. It was the center of Egyptian government and residence of its rulers until 1874, when Khedive Isma’il moved to ‘Abdin Palace. It is still occupied by the military today, but is now open as a tourist attraction comprising, notably, the National Military Museum, the 14th century Mosque of al-Nasir Muhammad, and the 19th century Mosque of Muhammad Ali which commands a dominant position on Cairo’s skyline.

Saints Sergius and Bacchus Church is believed to have been built on the spot where the Holy Family, Joseph, Mary and the infant Jesus Christ, rested at the end of their journey into Egypt.

Saint Virgin Mary’s Coptic Orthodox Church, also known as The Hanging Church is one of the oldest churches in Egypt and the history of a church on this site dates to the third century. It is named for its location above a gatehouse of Babylon Fortress, the Roman fortress in Coptic Cairo; its nave is suspended over a passage. The land surface has risen by some six metres since the Roman period; so the Roman tower is mostly buried below ground, reducing the visual impact of the church’s elevated position.

We stopped by the Nile and walked to a riverboat – a floating restaurant – where we had a buffet lunch. Have heard much about people getting food poisoning we were careful with what we ate. Not fun to have diarrhoea on the long drive back to Hurghada!
Fish Boat is a floating restaurant established in 1975. It is located on the widest view of the Nile, opposite two unique landmarks: the Manasterly Palace and Nilometer. It is distinguished from the other restaurants and cruises with its large indoor and outdoor areas, landscape, upper deck bar, café, kids area and parking. The best chefs and service in the Arab world.

The Cairo Marriott Hotel is a large hotel located in the Zamalek district of Gezira Island in Egypt and is just west of Downtown Cairo. It is one of the tallest buildings in Cairo. The Marriott opened in 1983, but its central wing was built as the Gezirah Palace for the Khedive Isma’il Pasha in 1869 and converted to a luxury hotel in 1894.

The first evening in Cairo we took a taxi out to Giza to see the Pyramids. Driving in Cairo is an experience in itself. Driving in the evening was not so bad. We stopped along a street in Giza and walked to the entrance to the Sound and Light Show at the shpinx and pyramids.

Major pyramids located at Saqqara include the Pyramid of Djoser – generally identified as the world’s oldest substantial monumental structure to be built of dressed stone – the Pyramid of Userkaf, the Pyramid of Teti and the Pyramid of Merikare, dating to the First Intermediate Period of Egypt.

Also at Saqqara is the Pyramid of Unas, which retains a pyramid causeway that is one of the best-preserved in Egypt. Together with the pyramid of Userkaf, this pyramid was the subject of one of the earliest known restoration attempts, conducted by Khaemweset, a son of Ramesses II.

Giza is the location of the Pyramids of Khufu/Cheops, the smaller Pyramid of Chephren, and the relatively modest-sized Pyramid of Menkaure, along with a number of smaller satellite edifices known as “Queen’s pyramids”; and the Great Sphinx of Giza.

Of the three, only Khufu’s pyramid retains part of its original polished limestone casing, near its apex. This pyramid appears larger than the adjacent Cheops pyramid by virtue of its more elevated location, and the steeper angle of inclination of its construction – it is, in fact, smaller in both height and volume.

On the way back to our hotel we visited a shop where we were shown how papyrus material is manufactured.

Papyrus is a material similar to thick paper used in ancient times as a writing surface, made from the pith of the papyrus plant.
Papyrus is first known to have been used in Egypt (at least as far back as the First Dynasty), as the papyrus plant was once abundant across the Nile Delta. It was also used throughout the Mediterranean region and in the Kingdom of Kush. Apart from a writing material, ancient Egyptians employed papyrus in the construction of other artefacts, such as reed boats, mats, rope, sandals, and baskets.

The Museum of Egyptian Antiquities is home to an extensive collection of 120,000 items, built in 1901. On the first floor there are artefacts from the final two dynasties of Egypt, including items from the tombs of the Pharaohs Thutmosis III, Thutmosis IV, Amenophis II, Hatshepsut, and the courtier Maiherpri, as well as many artifacts from the Valley of the Kings, in particular the material from the intact tombs of Tutankhamun and Psusennes I. Two special rooms contain a number of mummies of kings and other royal family members of the New Kingdom.

Khan el-Khalili is a famous bazaar and souk in the historic center of Cairo. Established as a center of trade in the Mamluk era and named for one of its several historic caravanserais, the bazaar district has since become one of Cairo’s main attractions for tourists and Egyptians alike. It is also home to many Egyptian artisans and workshops involved in the production of traditional crafts and souvenirs.