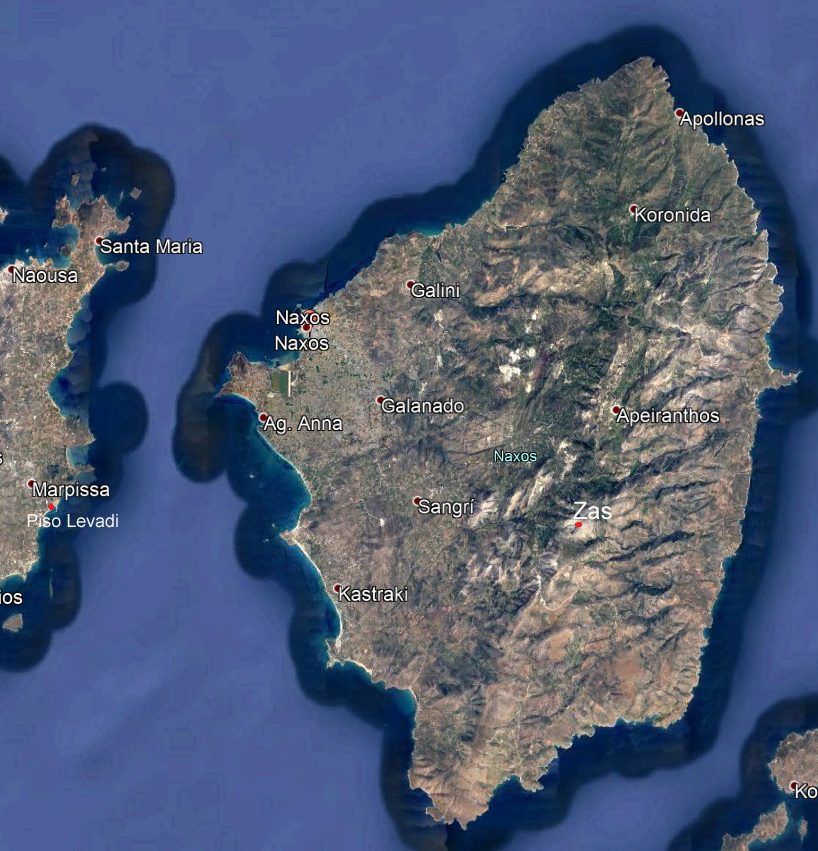 Naxos is a largest of the islands in the Cyclades, with a population of about 20,000. It was the centre of archaic Cycladic culture. The largest town and capital is Chora or Naxos City.

Naxos is a popular tourist destination, with several ruins. It has a number of beaches, such as those at Agia Anna, Agios Prokopios, Alikos, Kastraki, Mikri Vigla, Plaka, and Agios Georgios, most of them near Chora. As other cycladic islands, Naxos is considered a windy place perfect for windsurfing, as well as kitesurfing. There are seven sports clubs in the island that offer both of these sports and other water activities.

Naxos is the most fertile island of the Cyclades. It has a good supply of water in a region where water is usually inadequate. Mount Zeus (1,004 metres) is the highest peak in the Cyclades, and tends to trap the clouds, permitting greater rainfall. This has made agriculture an important economic sector with various vegetable and fruit crops as well as cattle breeding, making Naxos the most self-sufficient island in the Cyclades. Naxos is well known within Greece for its “Arseniko Naxou” cheese, potatoes and Kitron, a local lemon-citrus spirit.

By Boat to Naxos from Santorini (Thera), July 2012

Our charter flight arrived at Santorini, and we had to take a boat to Naxos. When boarding tourists change to shorts and T-shirt and enjoy the sun for the hours it takes to reach Naxos. On the way we stopped in the islands of Ios and Paros to for departing passengers.

Sailing out of the Thera crater gives you a magnificent view and scenery. Arriving in the Ios lagoon where the port is located, and the port of Piso Livadi on Paros, is also very nice.

After checking into our nice Aeolis hotel we went out to have dinner. A few hundred meters from our hotel is a small square with several restaurants. We stopped there for dinner.

Later we walked down the pedestrian street to the harbour, and then up through narrow streets to the castle on a small hill in the center of the city.

Only 5 minutes from our hotel was the Agios Georgios beach. This is a shallow sandy beach with clear waters. We rented chairs and parasol conveniently near bars and restaurants.

Sun, warm water, suntan lotion, …. what else is there to say?

One of our favourite snacks in Greece is the Gyros. Pita bread filled with grilled pork, vegetables and Tzatziki – delicious!

Naxos is a large island with high mountains and small villages – perfect for sightseeing by car. On the north tip of the island is the picturesque fishing village of Apollonas.
On the way back we stopped in the marble paved town of Apeiranthos, and drove up to view the high Mount Zeus at 1004 meters (which I climbed in 2004).

One day we took the bus up to the village of Kinidaros The bus ride itself was a nice experience, stopping in small villages.

We started high up in the mountain and followed a dirt road that ran down into a valley. From top of the hill there was a path with steps which we followed instead. After a while we lost the path and ended up down by a stream and a small dam. Nice and cool drinking water. We had to back-track to the road and follow that down to a bridge. Here we found the path and followed this down to a village. It was very hot that day, and we ran out of water. When we arrived in the village of Engares we went straight to the Stella tavern and ordered drinks and Greek Salad.

After a warm day, a swim in the pool and a nap, it is nice to walk down to the harbour and sit in one of the sunset bars to watch the sun disappear behind the horizon.

Another nice place to watch the sunset is from the small island at the end of the pier. Here a stone gate/portal is all that still stands of the Apollo temple.

In the mild evenings it is nice to stroll along the harbour pedestrian street between shops and restaurants. Then up through the narrow streets below the castle. Shops with all kinds of things and souvenirs are found in the wider streets, and restaurants are located here and there.