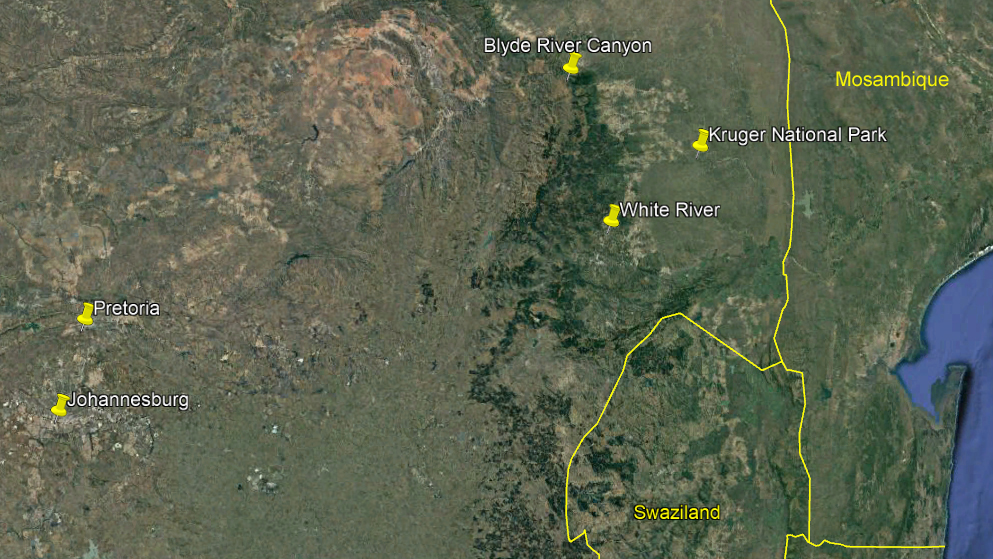 Kruger National Park is one of the largest game reserves in Africa. It covers an area of 19,485 km2 in the provinces of Limpopo and Mpumalanga, and extends 360  from north to south and 65 km from east to west. It became South Africa’s first national park in 1926, and is now part of the Great Limpopo Transfrontier Park, a peace park that links it with the Gonarezhou National Park in Zimbabwe, and the Limpopo National Park in Mozambique.

All the big five game animals are found at Kruger National Park, which has more species of large mammals than any other African game reserve (147 species). Plants life in the park consists of four main areas: Thorn trees and red bush-willow veld, Knob-thorn and Marula veld, Red bush-willow and mopane veld, and Shrub mopane veld.

The park has nine main gates allowing entrance to the different camps. There are webcams set up to observe the wildlife.

Blyde River Canyon is one of the largest canyons on Earth, and it may be the largest ‘green canyon’ due to its lush subtropical foliage. It has some of the deepest precipitous cliffs of any canyon on the planet. It is the second largest canyon in Africa, after the Fish River Canyon in Namibia, and is known as one of the great wonders of nature on the continent. Possibly the best view in the whole of the Blyde River Canyon is of the “Three Rondavels”, huge, round rocks. This canyon is part of the Panorama Route. The canyon supports large diversity of life, including numerous fish and antelope species as well as hippos and crocodiles, and every primate species that may be seen in South Africa.

We stopped for an hour on our way to the Krüger National Park.

We stayed 2 nights in the Karula Hotel in White River for our one-day safari.

Starting early in the morning we entered the park through the Phabeni gate, and were transferred to safari jeeps. After just 10 minutes driving we saw two lions at a distance, and 5 minutes later a leopard in a tree quite close to the road. We had a breakfast break at Skukusa, and lunch at Afsaal Trader’s Rest. During the day we saw lots of elephants, impalas, giraffes, zebras, elands, and other animals. Just before leaving the park in the afternoon we also saw buffaloes next to the Phabeni gate.

In the evening we had a long tasty dinner in our hotel, and our guide and waiters danced and sang South African songs for us.