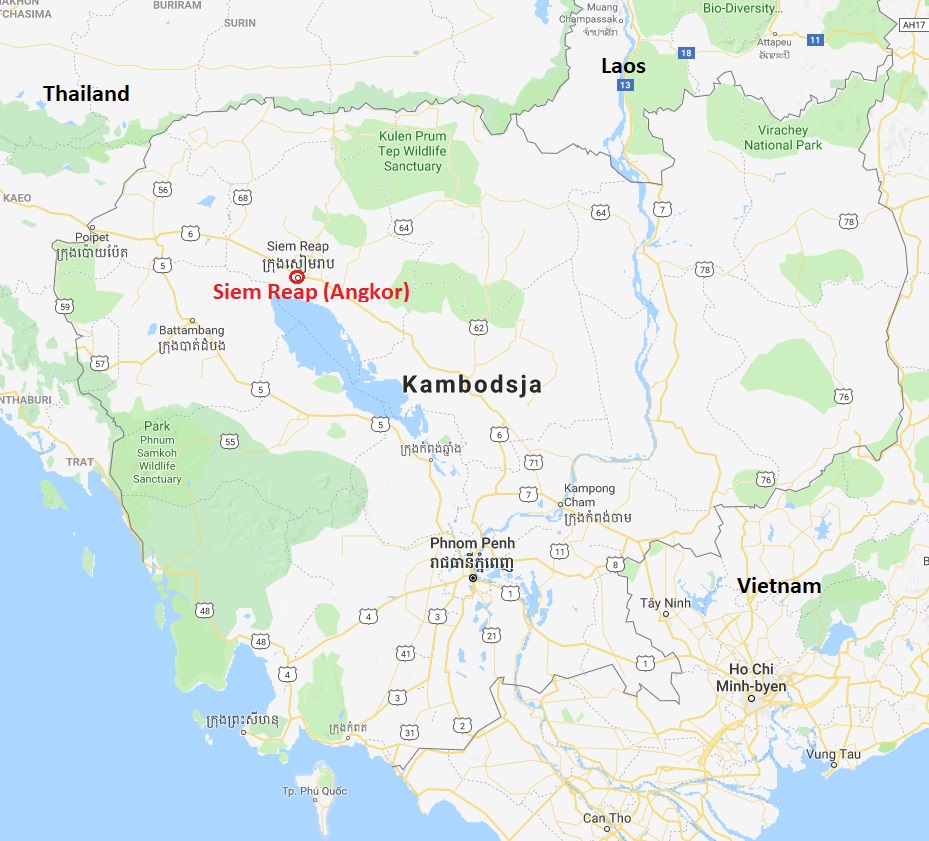 Officially the Kingdom of Cambodia is a country located in the southern portion of the Indochina peninsula. It is 181,035 square kilometres in area, bordered by Thailand to the northwest, Laos to the northeast, Vietnam to the east and the Gulf of Thailand to the southwest. Population is about 17 million.

During a visit to Thailand in 2007, we booked a 2-day tour to Siem Reap in Cambodia to see the famous Angkor Archaeological Park.

Angkor was the capital city of the Khmer Empire, located amid forests and near modern-day Siem Reap, and flourished from approximately the 9th to 15th centuries. A Khmer rebellion against Siamese authority resulted in the 1431 sacking of Angkor, causing its population to migrate. Angkor had been the largest pre-industrial city in the world, with an elaborate infrastructure system of at least 1,000 square kilometers with temples at its core. The area may have supported between 750,000 and one million people. Angkor is considered to be a “hydraulic city” because it had a complicated water management network, which was used for systematically stabilizing, storing, and dispersing water throughout the area.

Angkor Wat is a temple complex and the largest religious monument in the world, measuring 162.6 hectares (1,626,000 m2). Originally constructed as a Hindu temple for the Khmer Empire, but was gradually transformed into a Buddhist temple. It was built by the Khmer King Suryavarman II in the early 12th century in the capital of the Khmer Empire as his state temple and eventual mausoleum.

As the best-preserved temple at the site, it is the only one to have remained a significant religious center since its foundation. The temple is at the top of the high classical style of Khmer architecture. It has become a symbol of Cambodia, appearing on its national flag, and it is the country’s prime attraction for visitors.

Ta Keo has five sanctuary towers built on the uppermost level of five-tier pyramid consisting of overlapping terraces surrounded by moats. Its particularly massive appearance is due to the absence of external decorations, as carving had just begun when the work stopped, besides an elaborate use of perspective effects. The four stairways that lead on the summit are continuous and very steep. The central tower reaches a height of 45 meters.

Ta Prohm is the modern name of the temple built in the late 12th and early 13th. It was founded by the Khmer King as a Buddhist monastery and university. Unlike most Angkorian temples, Ta Prohm is in much the same condition in which it was found. The photogenic and atmospheric combination of trees growing out of the ruins and the jungle surroundings have made it one of Angkor’s most popular temples with visitors. UNESCO inscribed Ta Prohm on the World Heritage List in 1992.

The Bayon is a richly decorated Khmer built in the late 12th or early 13th century as the state temple of the Mahayana Buddhist King Jayavarman VII. The Bayon stands at the center of his capital.

The Bayon’s most distinctive feature is the multitude of serene and smiling stone faces on the many towers which jut out from the upper terrace and cluster around its central peak. The temple has two sets of bas-reliefs, which present a combination of mythological, historical, and mundane scenes. It has been described as “the most striking expression of the baroque style” of Khmer architecture, as contrasted with the classical style of Angkor Wat.